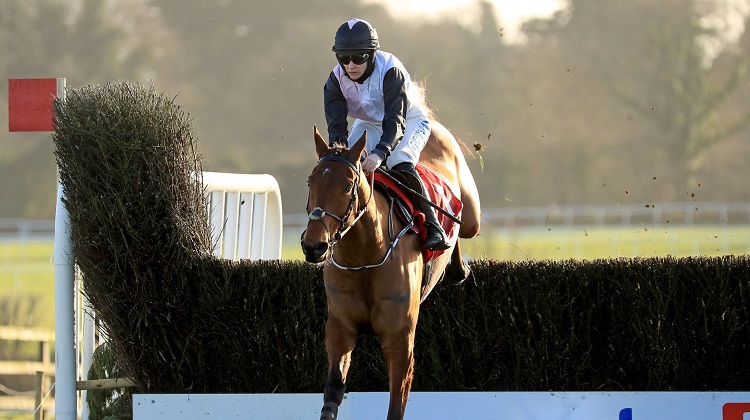 Entries for the four novice chases' at this year's Festival were published today.

And all of these Cheltenham races have Irish-trained horses as ante-post favourite.

They include potential superstars such as Galopin Des Champs and Bob Olinger.

Last year's novice chases' were actually some of the few Cheltenham Festival races not dominated by the Irish.

British-trained horses finished first and second in both the Arkle and the Marsh (now the Turners).

They were also second and third in the Brown Advisory, while Next Destination ran Galvin close in the National Hunt Chase.

The 2-mile Arkle has attracted the smallest entry of 24 horses, half trained in Ireland, including ante-post favourite Ferny Hollow.

The 2020 Champion Bumper winner missed last year's Festival with a stress fracture, but has won his first two outings over fences for Willie Mullins.

Mullins' has nine entries in total including Blue Lord who was set for second in last year's Supreme before falling at the last.

The Closutton maestro has trained four of the last seven winners of this race.

Meanwhile, Alan King's Edwardstone leads the home defence after a hat-trick of wins over fences including the Grade 1 Henry VII at Sandown.

There are a total of 48 entries for this marathon test over 3 miles, 6 furlongs.

Stattler, one of nine Mullins entries, was fourth when favourite for last year’s Albert Bartlett but looked a natural over fences on his chase debut last month at Fairyhouse.

Elliott has a strike rate of 4 winners from 8 runners in this race and he would also have been training last years' winner, Galvin, but for his suspension.

He has a total of seven entries this season, including Farouk D'alene and Fury Road.

There are 47 entered for the Festival Novices' Chase, run over 3 miles ½ furlong.

Galopin Des Champs is the ante-post favourite after his dazzling debut over fences at Leopardstown for Willie Mullins.

Last year's Martin Pipe Hurdle winner is yet to receive an official rating over fences, but that race earned him a Racing Post Rating of 163.

That's the highest RPR for a chasing debutant in the modern era.

He is one of 11 Mullins' entries, which also include Capodanno, who won a fiercely competitive handicap hurdle at last year's Punchestown Festival.

Bravemansgame spearheads the British contingent for Paul Nicholls. He has won his three starts over fences, including the Grade 1 Kauto Star Novices’ Chase.

Another leading novice is Lucinda Russell's Ahoy Senor, who also has a speculative entry to the Gold Cup this year.

He showed his potential when demolishing the field in a Grade 2 at Newbury in November, then finished behind Bravemansgame at Kempton.

There are 44 entered for this 2 mile, 4 furlong race, which is headed by Bob Olinger in the ante-post market.

Last year's Ballymore Novices’ Hurdle winner has won his two races over fences for Henry de Bromhead, including a novice chase at Punchestown on Sunday.

One of several of these novices to have alternative options, this looks his target.

Willie Mullins has no fewer than 14 entries, including Jungle Boogie - who is actually entered in all four of these novice chases'.