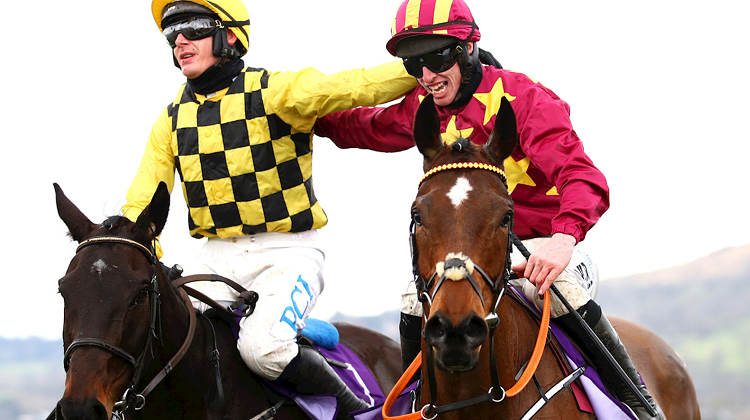 Entries have been revealed today for the three showpiece Chases' at the Festival - the Gold Cup, Champion Chase and Ryanair Chase.

Last year, Irish trained horses finished 1-2-3 in both the Gold Cup and Ryanair Chase, plus 1-3 in the Champion Chase.

Henry de Bromhead alone won both the Gold Cup and Champion Chase (not to mention the Champion Hurdle).

And the Irish look set to dominate again.

The Henry de Bromhead trained pair were separated by just over a length in 2021.

But A Plus Tard is the ante-post favourite having won the Betfair Chase in November, before being narrowly beaten last week in the Savills Chase at Leopardstown.

By contrast, Minella Indo was pulled up in the King George VI Chase on Boxing Day.

Dual winner Al Boum Photo finished third in his hat-trick bid last year, but he is in the mix again, having won his seasonal debut at Tramore on New Year’s Day.

He is one of a seven-strong entry from champion Irish trainer Willie Mullins.

Savills Chase winner Galvin is the leading hope of Gordon Elliott, who has five Gold Cup entries, also including the mare Mount Ida, a winner at Punchestown on Saturday.

The shortest price of the home trained contenders is currently Dan Skelton’s Protektorat, a dominant winner of the Many Clouds Chase at Aintree last month.

Lucinda Russell's Ahoy Senor is an eye-catching entry, with the exciting novice having won at Newbury in November.

But the Brown Advisory Novices’ Chase would seem a more likely target this year.

Shishkin and Energumene headline the 22 entrants for a highly anticipated renewal of the Queen Mother (Wed 16th March).

If all goes to plan, this promises to be a blockbuster between the two eight-year-old's, both currently unbeaten over fences.

The Nicky Henderson-trained Shishkin, winner of the Supreme Novices Hurdle and Arkle Chase in the last two years, is currently the ante-post favourite at 11/10.

He made an impressive return this season in the Desert Orchid Chase over Christmas.

Irish challenger Energumene missed out on the Arkle last year after a late setback, but Willie Mullins' star gained compensation at the Punchestown Festival.

He also won his first appearance of the season at Cork last month.

In fact, the pair could meet for the first time in the Clarence House Chase at Ascot later this month in an intriguing appetiser.

Put The Kettle On, is one of four Henry de Bromhead entries, along with Envoi Allen, Notebook and Captain Guinness.

But last year's winner has been below her best since and is not certain to attempt a follow-up, with a step up in trip being eyed.

Last year's runner-up, Nube Negra, will be targeted at going one better though.

Dan Skelton's seven-year-old made an impressive reappearance on his return to Cheltenham in November's Shloer Chase.

But he performed well below par in the Tingle Creek at Sandown last month.

Various entries for the Cheltenham Gold Cup and Champion Chase also feature in the list of 36 Ryanair Chase contenders.

Saint Calvados was runner-up in 2020 and could have beaten Min if he hadn't been forced to switch on the run-in.

He missed out on last year's renewal and was recently switched to Paul Nicholls.

Another towards the head of the ante-post market is the decisive winner of the Grade 1 Kauto Star Novices' Chase at Kempton last season, Shan Blue, for Dan Skelton.

A Plus Tard, Energumene, Tornado Flyer, Put The Kettle On, Asterion Forlonge, Envoi Allen and Chacun Pour Soi are some other entries with alternative targets.