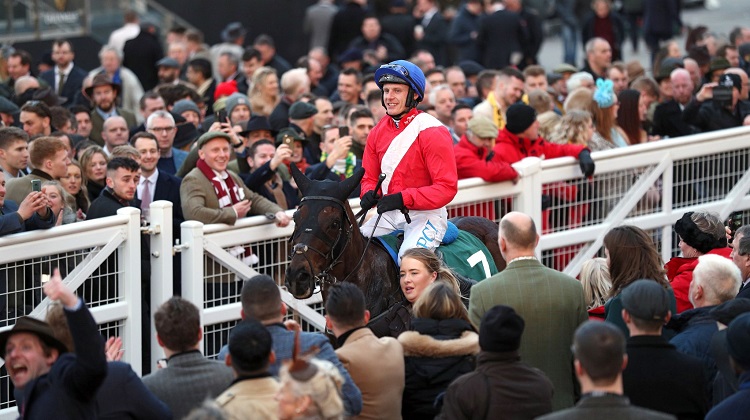 Ante-post Arkle favourite Ferny Hollow has been ruled out of the Cheltenham Festival with a 'suspensory ligament injury'.

The Willie Mullins-trained seven-year-old was just 6/4 for the 2-mile novices' chase.

Winner of the Champion Bumper in 2020, he won his debut over hurdles the following season - beating no less than Bob Olinger.

But he then spent over a year on the sidelines with a stress fracture.

He looked to have lost none of his ability judged by recent comeback races, winning his chasing debut at Punchestown, then a Grade 1 Novice Chase at Leopardstown.

But today Mullins revealed the lastest setback for his seemingly fragile gelding:

‘HE CAME HOME VERY SORE AFTER LEOPARDSTOWN AND WE GAVE HIM A BREAK. HE STARTED BACK CANTERING AND HE GOT SORE AGAIN, SO WE’VE DECIDED TO PUT THIS SEASON ON HOLD’

That is just ahead of the Alan King trained Edwardstone - who is now 3/1 generally.

A faller at the last in last year's Supreme, when set to finish second, Blue Lord looks a natural chaser - winning both of his starts this season decisively.

Eight-year-old Edwardstone has won three of 5 starts over fences, including the Grade 1 Henry VIII Novices' Chase at Sandown.

And he was last seen taking the Grade 2 Wayward Lad Novices' Chase at Kempton.

Third favourite, at 6/1 generally, is now the Gordon Elliott trained mare Riviere d'Etel - who was available at 33/1 in November.

Winner of her first three starts over fences, she then tested Ferny Hollow in the novice chase at Leopardstown on Boxing Day, albeit in receipt of 13lb as a four-year-old.

No longer a filly, she could face Blue Lord in next week's Irish Arkle at Leopardstown.